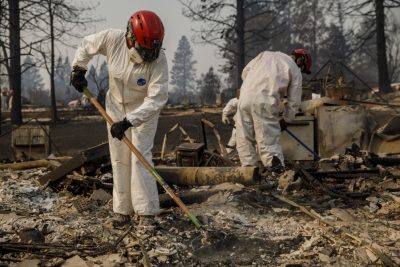 The Camp Fire Deployment to Paradise, CA 12/2/18 to 12/9/18
This is a summary of a deployment as a Chaplain with the Billy Graham Rapid Response Team. Here are some statistics taken from the Cal-Fire Website:

This was by far the worst fire disaster I have seen out of my last 5 fire deployments as a Chaplain. This fire affected more people, more structures, and a wider geographical area than any prior ones. The entire city of Paradise, CA and much of Magalia were all evacuated during the disaster, impacting over 30,000 people. Our Chaplains prayed with at least 100 people per day on average, serving in neighborhoods, churches, the Red Cross Shelter, The Salvation Army Food Distribution Warehouse, and at the Federal Disaster Recovery Center inside the vacant Sears building at the Chico Mall. We were blessed to be involved with 24 people professing Faith in Christ since the start of the deployment. Samaritan’s Purse has 1,846 Work orders still open as of Saturday, 12/8/2018. Most of these work orders are in areas that have yet to be opened up to the homeowners and our volunteers. Everyone is anxiously waiting for those areas to open so we can love on those people and present The Gospel at every opportunity. This deployment will soon get extremely busy…which is good. Samaritan’s Purse has set a tentative close out date of 2/9/2019.