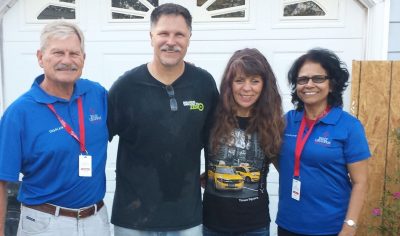 Two stories from the first week of Chaplain activities.  The first homeowner I want to talk about is a husband and wife couple.  We visited them to follow up after the Samaritans Purse teams had completed all of the work on their home.  Both the husband and wife shared their story.  The husband greeted the Chaplains with great gratitude.  He spoke of what he called “The blessing after the storm”.  He and his wife had been separated due to her problems with  alcohol abuse and codependency. She has a 31 year old son who is an alcoholic and has been since he was a teenager.  They made several attempts to help him that caused many problems within their family and great stress.  She then developed a problem with alcohol herself as a result of that codependent relationship, and then ultimately assaulted her husband physically and he had to have her arrested and have her placed into a faith-based program for recovery.  He also had to file a temporary restraining order to protect himself and his property.  (He then dropped it shortly after the storm)  He made several attempts to try to reconcile with her prior to her coming out of that program and they were not successful.  The Storm came and on “9/11” (9-11-18) she made an emergency call to him because the shelter she was staying in (that faith-based program) was evacuating and she had nowhere to go.  She begged him to allow her to come home.  He considered it briefly and then he consented with some reservations.  She came home and he described her as a totally changed person because of what God had done in her at that program.  They then spent the next two and a half days in the storm together in the house with trees falling all around and on the house and water about 12 inches deep on the floor.  They then had to evacuate together.  Financial problems also contributed to the strife in their relationship and he indicated that, unbeknownst to him, a settlement from the Veterans Administration came into his bank account electronically during the storm. They had been  waiting on it for several months, and it was for $14.000.  He had been medically discharged from the U.S. Navy after suffering a life threatening event and resultant injuries in Afghanistan.  He views that electronic deposit as an act of God because he had done the paperwork so long before and had heard nothing.  Also, because of a very recent Executive Order issued, he would pay no taxes on the settlement.
He and his wife were also pleasantly surprised when their insurance company quickly settled for what was necessary to repair the top floor of the house.  At that same time, FEMA agreed to a $3,000 payout to help him with the repair of the bottom floor of the home (their homeowner’s insurance did not cover that)  Samaritans Purse came and removed all of the debris from the property, cut up several trees, and helped him strip out the walls in the bottom floor of the house and the garage doing all of that in less than a day’s time.  He and his wife were truly amazed at the quality of the work and the speed with which it was done.  He smiled and said that he used the V.A. settlement to “buy his beautiful wife a beautiful car”.  We looked around at his house while talking, and The Lord impressed upon us that his house was a picture of his marriage.  The house was not totally destroyed but very seriously damaged but, as he was repairing the house he found several flaws in it that the original builder had made and was able to correct those. (and so he and his wife could do in their marriage….with The Lord’s help)  The Chaplain commented…..well, that’s a picture of your marriage, isn’t it ? He looked at the chaplains and said “that’s right”. He and his wife view their marriage as completely restored.  Both of them having rededicated their lives to Jesus Christ, and looking forward to fellowshipping at their church together….hopefully, eventually, as an entire family again. 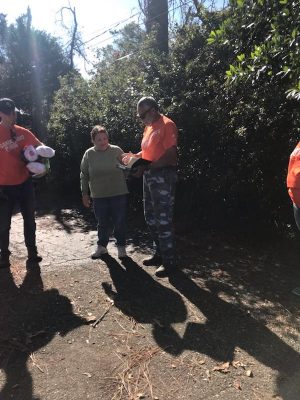 The next story involves a widow and her mother.  The chaplains stopped in to visit the homeowner at the conclusion of the Samaritans Purse work order.  She invited the chaplains into her house to talk.  We spoke of the disaster and how it impacted her and her elderly mother.  They lived there alone as her husband died 3 years ago.  She said she was very anxious and fearful due to evacuation to an unknown area.  They had to stay in a motel in an area unfamiliar to them for 12 days with the family dog, the whole time not knowing if her house was still there.  She had several ares of concern ongoing in her life before the hurricane.  Her adult daughter who is 28 years old is her only child and has little time for her or her grandma.  Our homeowner feels like her daughter is headed for a crisis because of self-induced professional pressures.  She is originally from Venezuela, and her sisters and their families still live in Venezuela and are struggling just to have enough food to eat, even though they are  professionals themselves in the healthcare industry.  She cannot visit them because of conditions in that country, and had to bring her mother to the states to live with her because of lack of nutrition based health problems in her mother’s life there in Venezuela.  She also spoke to us at length about her desire to live in a safe place and has spent time searching for such a place.  She realized after her search, that there was no such “safe” place.  The Chaplain was led by The Holy Spirit to Psalm 91 and read it to her in it’s entirety and mentioned that the place of safety is found in God.  We talked with her about having faith in God, and about The Peace of God, sharing from the scriptures.  We asked if she knew she would go to heaven in the event of her death, and if she knew Jesus personally.  She was not sure of either.  We asked if she would like to be sure, and she said she would want that if it were possible.  We told her it was indeed possible through Christ and read through The Steps to Peace With God tract provided to us by BGEA.  She listened intently, and then chose to invite Jesus into her life and surrender to Him.  We rejoiced together after leading her in a prayer for Salvation taken from that tract.  She also wanted to explain to her 90 year old mother what she had done today.  Her mom only speaks Spanish, so we gave her that same tract in Spanish.  She said she would take her mother through that booklet immediately after we were gone. She and her mother were lifelong Catholics, but had never truly committed their lives to Jesus Christ. The chaplain had been carrying that Spanish version of “Paz con Dios” in his pocket for probably a year……God knew exactly when it was needed !

Praise The Lord !  Thanks for all of your prayers during this deployment, they were surely felt by us, and answered by The Lord.  At last count, 45 people made first time decisions for Jesus Christ;  Samaritans Purse put in more than 20,000 volunteer hours, and completed over 650 work orders for hurting homeowners. There were also many rededications to Christ, and over 1,100 people had been prayed for over the 8 week period.