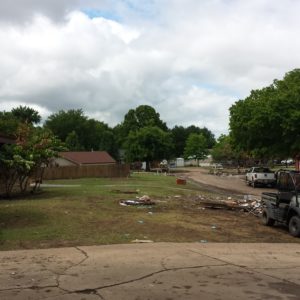 I had the great privilege once again to serve with Samaritan’s Purse assisting homeowners in a flooded area in and around Muskogee, Oklahoma from 6/15/19 through 6/19/19.

We assisted two homeowners in the “mud out” of their homes, wherein the walls and floors are stripped to the house framing and/or floor framing, cleaned, power-washed, and mold treated, thus being ready for the rebuilding of the home.

We got to meet the first homeowner briefly as all that was left was the final “nail check” (going around the entire home looking for nails that have not been pulled), power washing, and mold treatment, all of which only took about an hour.

The second home we worked on was just down the same street, and the homeowner’s name was Don.  He and his wife raised their 3 children in this home, and have lived there since the 1970’s.  His home is a lakefront property, and that particular lake lies in a drainage area that has flood controls, but in the case of this storm, the floodgates on the reservoir above him had to be opened….thus the area was flooded up to the eaves of his home.  This meant that we had to strip the walls all the way to the ceiling, and in many of the rooms, the ceiling too (he had a full basement). It was grueling work…..hot….very humid (70 to 90% each day) and we had some very heavy household items that had to be hauled out (including a pool table and workout equipment….from THE BASEMENT). The first day at the site, I realized I was the only man on a 14 person team….so guess who got to do the heavy lifting ? 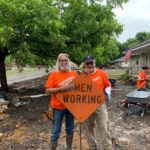 But these ladies were “game” and pitched in to help as much as they possibly could.  We worked all day, hauling the construction debris and discarded personal items to the curb, by wheelbarrow.  I probably hauled a good 25 to 30 loads, with a small slope having to be negotiated each time.  The homeowner kept asking me if I was o.k., and I told him I was.  He said “I don’t know which will wear out first, you or that wheelbarrow”.  I assured him that Samaritan’s Purse only uses top quality tools and equipment, so most likely I would wear out first ! He continually expressed his gratitude to the team;  he bought us donuts on the 2nd day, and he prayed for us each day after we began the day with prayer. It is always an incredible blessing to me to hear a homeowner who has basically lost everything praying for ME !  This man and his wife loved Jesus, and served Him wholeheartedly.  They are avid missionary supporters, and supporters of the work of Samaritan’s Purse and the Billy Graham Rapid Response Team Chaplaincy ministry.  He pitched in often to help us, was proactive and decisive on what he needed to discard (which is always refreshing and very helpful for us), and was a great encouragement. 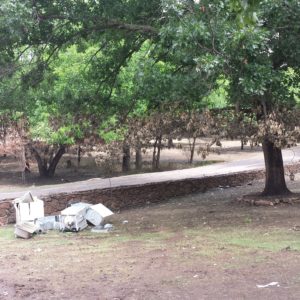 At the end of the first day, he asked me if I had noticed his “Mule”, which is a Kawasaki 4 wheeled cart with a tilt bed on the back.  I said that I sure had !  He asked me if I liked it….and I said that I sure do !  He then asked me if I would like to use it….I almost bent down and kissed his feet ! I told him that it would be an incredible blessing and a huge help….so he said he would gas it up and it would be mine to use for the duration of the job…..very sweet !  With that thing, we were able to do probably 3 times more work than before.  I was filled with joy every time I took a load out to the curb, and just tilted the back up and dumped it ! (versus pushing the wheelbarrow out there, and trying to dump it. Always a struggle, especially later in the day !)

We invited Don and his wife to dinner back at the base camp church, and they accepted.  It is always a joy and a great encouragement to the entire team when a homeowner joins us and shares how God is working in their lives.

I have included some pictures.  There is a picture of the water line on the trees, looking out from Don’s front porch (look for the brown leaves on the trees); a shot of the neighborhood looking down the street;  a picture of Bill and I with the ladies’ modified sign (he was with me on the second day, and was an incredible blessing); 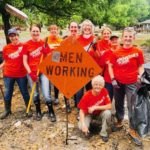 a shot of all of the ladies I was teamed up with, holding their “women working” sign;  a picture of the neighborhood when it was under water (Don’s house is uppermost in the picture);  a picture of the debris pile in front of his house at the curb along with the “mule”;  and a shot of the team on the 2nd work day with their Tyvex suits on.  Those suits keep all of the nasty mold and mildew off of you while you are working, but also seal in all of your sweat and body heat….not a whole lot of fun to work in.

All in all, I was totally blessed.  We also got to hear many encouraging stories from other homeowners who came to dinner each night, as well as stories of God’s working among the teams and in a few instances, bringing individuals to Faith in Christ. The host church was amazingly accommodating, welcoming, and warm towards every volunteer.  It was a great picture of The Body of Christ working together in unity, loving people, and making a difference in Muskogee. The Lord’s blessings upon you!